Iran and the "Status of Women" 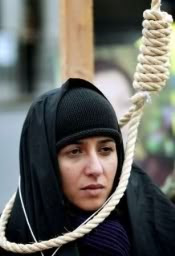 Photo from The Pirate's Cove
The ever helpful and proactive United Nations has allowed Iran to be elected to a four year term on the Commission on the Status of Women.

I've doubted the utility of the UN for many years. Oil for Food showed it to be an organization with much corruption. But this is unbelievable. I suppose women arrested in Iran for having a suntan can seek help from the commission?
And note how they divvy up the spoils of the Commission:

Forty-five Member States of the United Nations serve as members of the Commission at any one time. The Commission consists of one representative from each of the 45 Member States elected by the Council on the basis of equitable geographical distribution: thirteen members from Africa; eleven from Asia; nine from Latin America and Caribbean; eight from Western Europe and other States and four from Eastern Europe. Members are elected for a period of four years.

The US did nothing to stop this, it carried by acclamation. We could have called for a vote. I like Jennifer Rubin's take