Two pictures from the protests in Iran (click image to enlarge). These are from Reuters via Spiegel

First a woman who expresses a little individuality with a great pair of Chucks. However her fashion sense doesn't stop the fat piece of excrement from threatening her. I don't know if she fell down, or was pushed, but the image says to me "stay in the gutter, woman". This to me is Iran in a nutshell. 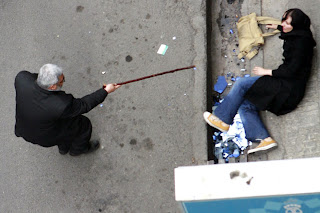 The second picture reminds me who we are dealing with. Yes, I have sympathy for their situation. I'm disgusted by the fact that the Revolutionary Guards' hired thugs appear to have murdered a protester. But an Iranian election rally/protest is the place for this crap? 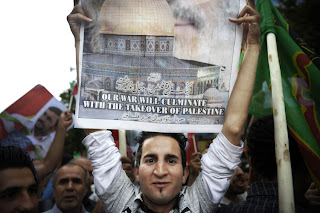 I wonder if that shiner is from her husband or the government. Does it matter?
Posted by Mark at 9:59 PM No comments:

Email ThisBlogThis!Share to TwitterShare to FacebookShare to Pinterest
Labels: Iran

I'm not an NBA kind of guy... but I still think it's lame that I had to learn this from a Russian woman...

Email ThisBlogThis!Share to TwitterShare to FacebookShare to Pinterest
Labels: Hotforwords

I love shopping on Amazon. One feature of the site that's in need of a little work, however, is the "Recommendations For You" bit. Today when I logged in I saw that Amazon thought I'd want a USB Blue Tooth dongle (I've been shopping for A2DP stereo head sets...) ... a PS3 controller... and then two things that really caught my eye - Ghirardelli Chocolate's premium hot cocoa mix (!?!) and... a package of super thin condoms. 100 of them. From Crown-Okamoto. Imagine my surprise....

Hmmm OK. Why on earth does Amazon think I need condoms... let alone 100 of them? I mean, rubbers have a shelf life, don't they? I'd have to use them for balloon animals before they expired...

But I digress. What could make Amazon think I need/want one hundred condoms? Apparently I put something on my wish list: 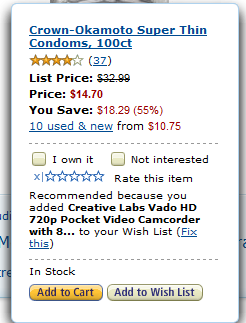 A video camera? Seriously? Just what does Amazon think I'm going to put on video?