Project Valour-IT, or It's Payback Time 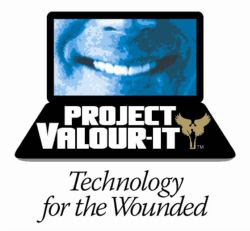 Until 11 November the fundraising gadget at the top right will have pride of place in this dump.

Think if it as a tip jar for those who have given more than just a few years of their lives in service to the nation. Project Valor - IT is a program run by Soldiers' Angels. They trick out computers for our wounded service members. Stuff like Voice Activated laptops for vets who have lost hands/arms. Their moto is "Technology for the wounded", but I think it goes beyond the hardware.

The fundraising is divided into "teams"; Air Force, Army, Navy, Marines. (I think the Coasties should have a team too). There is one goal, but we like our parochial rivalries. As I type the grand total is just north of $35 thousand dollars. Please help

Give till it hurts. Then give some more. Donations are tax deductible. You're employer may even match, so ask at work.

And while I have you - head over to our esteemed team captain Greyhawk at the Mudville Gazette... Mrs Greyhawk has an interesting Halloween line up in honor of Project Valour-IT.

But I do wonder why they use the British spelling for Valor...
Posted by Mark at 10:38 AM 2 comments:

Email ThisBlogThis!Share to TwitterShare to FacebookShare to Pinterest
Labels: Android

A picture is worth...

I saw this over at The Black Sphere and thought it was a great picture. In one shot it highlights the hypocrisy of the Democrats, and echoes their cousins in the old National Socialist model.... 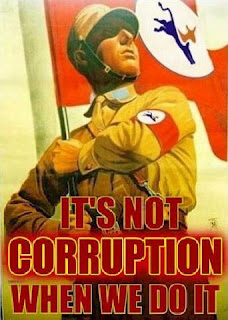 Email ThisBlogThis!Share to TwitterShare to FacebookShare to Pinterest
Labels: Democrats

Should I return to VZW?

I left Verizon last fall so I could get on the Android bandwagon (before there was a bandwagon). Big Red will be offering their first Android hand set next month. And me only 1/2 through my contract... and getting a little tired of my G1.

Verizon isn't just offering an Android hand set, they are actively promoting it.

Gert Wilders, a Dutch politician, had been banned from the UK. The government feared that his outspoken opposition to Sharia could lead to violence. I suppose they were worried that the Anglicans would mix it up with the Presbyterians, or something.

The ban was reversed in court. Wilders went to the UK yesterday. The Daily Mail headlines their story Far-right Dutch MP Geert Wilders faces Muslim protest after arriving in the UK (Does the Daily Mail EVER refer to anyone as a far-left politician?)


Here's some of the signs that "greeted" Mr. Wilders: 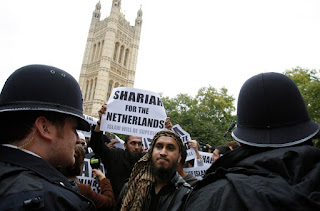 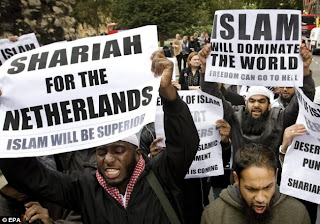 Protester Abu Mousa said: 'What he says deserves the death sentence under Islam.'

Sayful Islam, said he wanted to see Mr Wilders 'tried in an Islamic court' for 'insulting the Prophet'.

He added: 'We need to put this dog on a leash.'

So, Freedom is bad, sharia is good. Has it occurred to these troglodytes to move OUT of the (more or less) Christian country of Great Britain?
Posted by Mark at 8:24 AM 2 comments:

For cleaning the National Wound 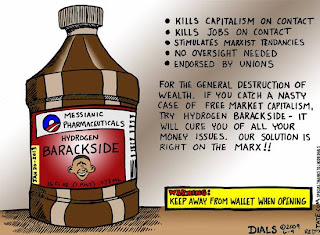