... who Bret Kimberlin is? A convicted domestic terrorist and purger. Who's not only NOT in prison, but running a left wing tax free organization, when he's not harassing and badgering people he disagrees with.

Michelle Malkin on the Free Speech Blog Burst
Posted by Mark at 7:32 AM No comments:

Someone help me out here... but when did NATO become this lightening rod for lefty/anarchist/whackadoodle protesters?

See, for example, 3 men accused of terror plot... and check the pictures at the link. I especially like this one: 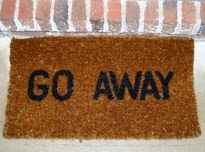 So, you own a moving company in Rhode Island and get calls from Connecticut to handle moving people's stuff... except the jobs start and end in Connecticut. You politely tell the potential profit making customer that you can't take their money because you're not licensed to operate in Connecticut. But since you get so many calls you decide to open a branch in Connecticut.

But first, you have to play "Mother, May I" with the State Department of Transportation.
Yes, really:


If Connecticut is open for business, Bob Romano wants to know who turned out the lights.
Romano, owner of Warwick, R.I.-based Coutu Brothers Movers, applied several months ago to expand his current three-truck moving operation into North Stonington. By his estimation, Romano spent more than $6,000 doing everything the state Department of Transportation told him to do: leasing a convenient location on Norwich-Westerly Road, paying his business-entity fee and even making repairs to the office space he intended to occupy.
Then, last week, a DOT hearing officer issued what Romano saw as a stunning denial of his application, saying the business owner had not proved there was a need for his services and noting that two other moving companies in the region had claimed new competition would hurt their businesses.

It would appear that Connecticut state government is in the business of ... raising barriers to entry to business. How did it come to be that a small business has to demonstrate a need before being allowed to open? Why is the government licensing and permitting moving companies in the first place? I mean, other than the making sure their trucks are registered and insured, why does this guy have to beg to compete for business? As is usually the case, when government over regulates government becomes a tool of established businesses to keep upstarts out - or sometimes a weapon for one business to use against another.
But Connecticut is turning a corner. After spending a sweet $27 Million dollars on out of state advertising, we're proclaiming ourselves to be... Still Revolutionary. $27 million. I could have come up with something only half as bad for a quarter of the money.
Connecticut: Still Revolutionary, unless you run a business.